It’s hard to imagine a future without tech juggernauts like Google, Apple, Facebook or Netflix but in the rapidly changing world of technology, even the mightiest can fall.

Their power, influence and Wall Street valuations can seem indestructible but history is littered with corporate giants of the past that once seemed unstoppable.

A decade-old cover of Forbes magazine did the rounds last week. It pondered the question whether any other company could catch Nokia, which at the time was the undisputed king of the mobile phone.

As the BBC wrote last year, the company “revolutionised the mobile phone industry in the late 1990s and helped turn Finland’s economy into one of the most prosperous in the world”.

At its peak Nokia supplied 40 per cent of the world’s mobile phones. Today the mobile phone part of the company is essentially extinct and lives on in name only. 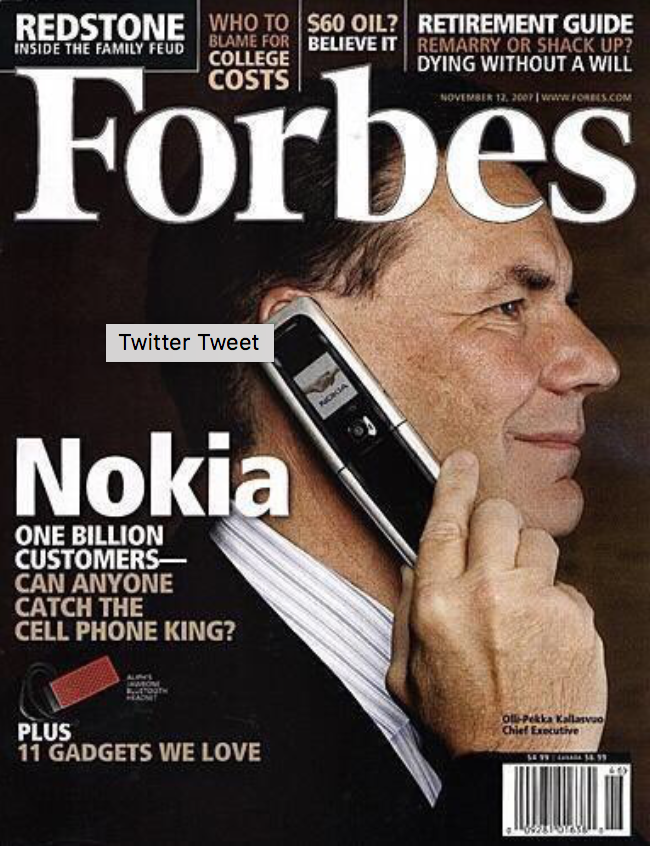 The story of film and camera producer Kodak has become a perfect case study in dominant companies being washed away by a wave of new technology.

The conventional autopsy declares the company was brought down because it was blindsided when cameras went digital and then disappeared into mobile phones. While this is the crux of the company’s demise, it misses the small fact that the first prototype of a digital camera was created in 1975 by Steve Sasson, an engineer working for Kodak.

As the Harvard Business Review pointed out, Kodak invested billions to develop a range of digital cameras. The company was so worried about the threat posed by the emerging technology that they spent much of that money before they knew how the market would develop. And in the end, they got left behind.

Started by eccentric Silicon Valley entrepreneur and computer scientist Jim Clark, Netscape developed a series of web browsers in the early days of the internet and personal computer.

The company was one of the first and most important start-ups to shape the internet and at one time was clearly winning what became known as the “browser wars”.

After a long battle between Microsoft’s internet Explorer and Netscape Navigator – including an antitrust lawsuit Netscape successfully filed against Microsoft which helped ensure today’s level of innovation in the online tech space – Microsoft ultimately won the war.

While Netscape didn’t stand the test of time quite like its chief rival internet Explorer has, its open-source transition into Mozilla did eventually birth Firefox.

The story of Netscape and its co-founders was beautifully told in Michael Lewis’ The New New Thing. In the book he notes that Silicon Valley’s most valuable companies tend to be those that “exist in a state of pure possibility”.

But ultimately, sometimes that possibility doesn’t completely pan out.

To be fair, Netscape was bought for a very decent $US4.2 billion by AOL in 1998 before eventually being shut down. Nonetheless, despite its significance the company is largely an unknown name to today’s younger netizens.

At its December 2008 peak, MySpace attracted 75.9 million monthly unique visitors in the US alone – about a quarter of the country’s entire population.

One of the earliest versions of social media, the website promised to redefine music, online dating and pop culture. But ultimately mismanagement, a flawed merger and countless strategic blunders accelerated Myspace’s fall from being one of the most popular websites on earth, to something that became fundamentally uncool.

Unlike other emerging social media companies at the time which were backed by Silicon Valley venture capitalists, Myspace’s was under pressure to monetise the site leading to it becoming overly populated with ads, Bloomberg Business reported.

MySpace still exists but it is a shadow of its former self. Meanwhile, Facebook has more than 2 billion active monthly users and an astonishing market cap of $US519.4 billion ($A680 billion). And it’s only a little over a decade old.